I just can’t bring myself to write my thoughts about the Gilmore Girls Revival on Netflix.  It’s too soon. But I promise you, it’s coming one day.  That show has had such an effect on our family.  I have to keep verbalizing, “It’s NOT real.  It’s just a show.”

Yesterday, Erica and I both had very exciting things happen to us concerning Gilmore Girls.  It’s unbelievable, really.

I’ve mentioned before that we found out about Barnard College because of our love of Gilmore Girls. When we first started watching, we Wikipedia-ed the show and its star, Lauren Graham.  She is a graduate of Barnard, and that is where Erica attends.  (That’s another upcoming blog post, too.)

Lauren Graham will be hosting a screening of the first episode of the Gilmore Girls revival with Barnard alum and with three lucky lottery winners from each Barnard class.

Yes, ERICA WAS CHOSEN to screen the episode with Lauren Graham as part of the Junior class. 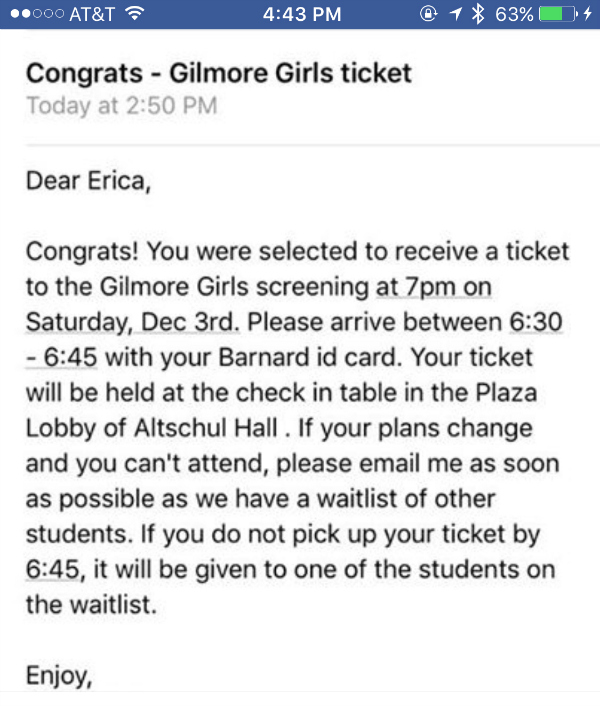 I’ve been on Twitter ever since I started eWillow.com, but it wasn’t until recently that I started using it daily.  It’ a great marketing tool.

I Tweeted out some of my thoughts about the Gilmore Girls Revival, and one Tweet in particular received several likes and retweets.

Last night, however, Erica texted me and told me that a friend of hers saw my Tweet on a website called hellogiggles.com.  I’ve never heard of that site, but when I visited the link, there was my Tweet, front-and-center.  It was the focus of the article.

Read the article here.  If you aren’t a fan of Gilmore Girls, my Tweet won’t make any sense to you, so you can just scroll down the article and see the Tweet.

My friend Debbie always says to me, “How does this stuff happen to you when you never leave the house?”  I don’t know Deb.  I don’t know. 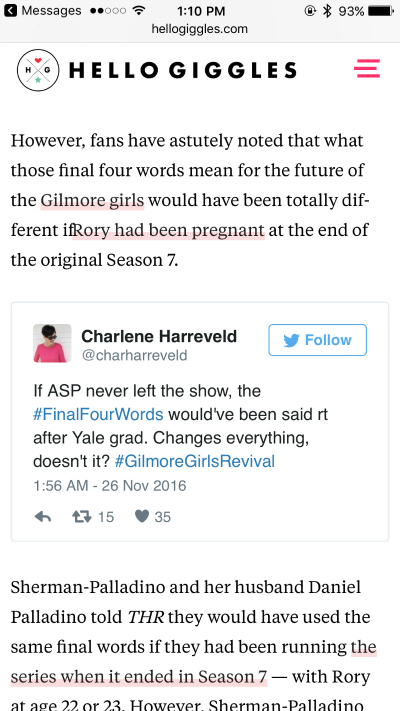